The collection of Trasimeno Beers are born from the medieval villages and eminent people of the past, transforming their stories into a delectable range of alcoholic beverages. 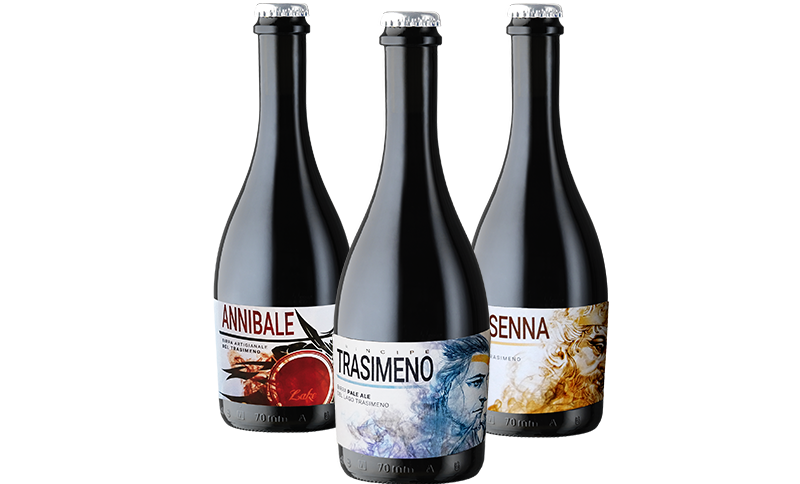 The Beer of the Trasimeno Prince

The Beer of the Trasimeno Prince recounts the myth the lake nymph called Agilla and her young suitor. Legend has it that Agilla fell in love with Prince Trasimeno, God Tirreno’s handsome son. She attracted him to the lake with her beautiful voice and melodious songs. Their love was short lived however as he is said to have drowned in the lake’s waters and she died of a broken heart looking for his body. To date, when the wind blows along the shores of the lake which today bores the Prince’s name, people can still hear the gentle lament of Agilla seeking her prince.

The Beer of Hannibal

The Beer of Hannibal, like the warrior that inspired its name, has a strong and decisive nature, with a honey and fruity fragrance. Hannibal was the leader of the Carthaginians during the Battle of Lake Trasimeno that took place on 21 June 217 BC and was a major battle in the Second Punic War. Hannibal defeated the Romans under the consul Gaius Flaminius at Lake Trasimeno in the largest ambush in military history in terms of the number of men involved. Hannibal is also famous for having war elephants alongside his cavalry troupes.

Lars Porsenna was an Etruscan king who ruled over the very powerful city of Clusium, known today as Chiusi. He is famous to this day for his war against and takeover of Rome at around 508 BC. There are many legends from his siege of Rome, including that of a Roman youth named Gaius Mucius who tried to assassinate him but killed his secretary in a case of mistaken identity. Gaius was captured and brought before Porsenna, where he explained that he was merely the first of 300 Roman youths who would attempt to kill him until they succeeded. To prove his valour, Mucius thrust his right hand into a sacrificial fire, thereby earning for himself the surname of Scaevola (“lefty”). Astounded by his courage, Porsenna decided to free him.